Getting 'hands on" in the Anatomy Museum! 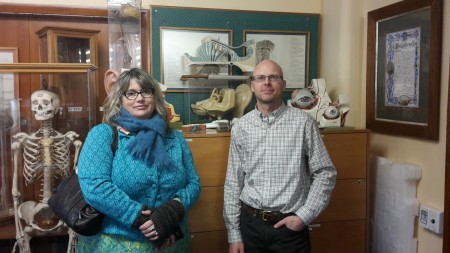 It was with a lot of excitement Jane Macknight and I met with Chris Smith the curator at the W.D Trotter Anatomy Museum on Tuesday 9 August. We found the Museum on the 2nd floor of the
Lindo Fergusson Building after only asking for directions twice! The collection is large and a bit daunting. Most items were self-explanatory, some a bit more bizarre. The museum contains a lot of anatomical models dating back to the 1800s. Many of the older more fragile pieces made of papier mache are behind glass, but most of the rest of the collection are on open shelves due to the museum’s “hands on” policy.

It was interesting what I found beautiful made Jane feel queasy. (Jane says: yeh, the blue furry-ish model of a liver didn’t do it for me). We did a circuit of the museum with Chris answering our questions, worked out some logistics and then made a selection for a display at the wonderlab. These anatomical models will be shown during the Medical Marvelled themed Heritage celebrations, but won’t be the only interesting connection with the Anatomy Museum as curator Chris Smith will be doing a presentation about the W.D Trotter Museum 6pm 16 November at the Forrester Gallery.