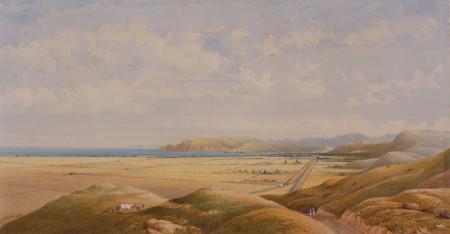 O’Brien was born in Ireland to an aristocratic but not wealthy family and appears to have trained as an architectural draughtsman before emigrating first to Australia and later to Dunedin in 1863. While In Dunedin he worked as a surveyor and for architectural firms as well as pursuing a relatively successful artistic career.

This work is carefully and beautifully painted and reveals the training of its creator – skilled in perspective and draughtsmanship. The work is executed in what is generally known as  the ‘topographical style’, with the aim of recording a fairly factual or realistic “view” of a townscape or landscape. This style of painting began to go out of fashion in the late 1870s replaced by a taste for more romantic and sublime landscapes. The gallery has two other later works attributed to O’Brien which are more in tune with this later style  (they  can be viewed on our collections online at https://collection.culturewaitaki.org.nz/explore.

I have chosen this painting to talk about for several reasons. Firstly because in contrast to my other blogs it represents another quite distinct style or approach to the depiction or representation of a landscape or place.

The second reason is that in some ways the style creates a sort of double illusion partly because we associate a style that looks accurate and neat (like a photograph or a map) with the truth. If you think about this work though its actually really a pretty effective piece of propaganda inviting you as the viewer to admire the scene - one which shows the potential and vitality of Oamaru as a burgeoning agricultural community as if viewed from Pukeuri Hill. In fact (and you would know this if you had visited the tree reserve on the hill) a photographer would have struggled to contain all of this view in one photograph.  A similar type of argument can be made for this view of Oamaru Harbour by E A Gifford [caption – E A Gifford, Untitled (Oamaru Harbour 1880), watercolour on paper, 775x1230mm, Collection of the Forrester Gallery fg2001.36.1]. If you have a look at our collections online you will see clearly how the painter has manipulated the pictorial space to include a wealth of information beyond that which one photograph could achieve.

The third reason is that the work also illustrates a dark truth about the processes of European settlement and colonialism whereby in many instances the existing Maori cultural value and story of the land became overwritten by European values and virtually lost.  Pukeuri Hill (opposite the meatworks) was a familiar landmark and wayfinding point for early Maori. We know this from the  diary of Edward Shortland who travelled through the district in 1844 as Protector of Aborigines. We also know from the Ngai Tahu Archives that Pukeuri Hill is named after Pukeuri an ancestor on the Arai-te-uru waka that capsized off the coastline near Matakaea (Shag Point) scattering its gourds (the moeraki boulders) across the beach. http://www.kahurumanu.co.nz/atlas.

Probably many Waitakians are unaware that this hill opposite the meatworks is also a public tree reserve complete with special plantings and a plaque dedicated to Edward Shortland by the Oamaru Tree Planting Association in 1953.  Wouldn’t it be great to see a reinvigoration of this public reserve with better access and perhaps some public sculpture reclaiming this story of place.