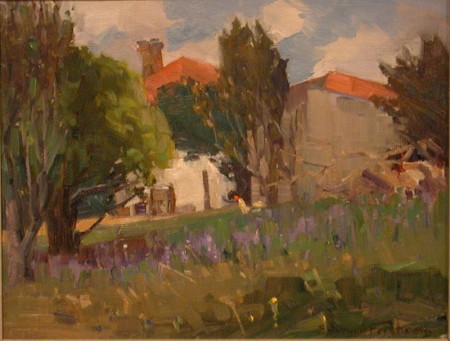 Claus Edward Fristrom (1864-1950), Homestead Titirangi, undated, Oil on linen on board, Collection of the Forrester Gallery FG2004.6.2) This week during my collection store checks I randomly selected a work by Claus Edward Fristrom, a Swedish artist who arrived in Queensland around 1884 and also lived in Auckland between 1903-1915, before migrating permanently to California. The Gallery has two works by Fristrom, both privately gifted, which find their place in the collection as fine examples of the impressionist style. This is a physically small work, it benefits from being viewed up close. It is an oil painting on linen on board and it is beautifully and skilfully painted. Art historians would describe it as being strongly influenced by the French impressionist style of the 1890s. There was also a very popular and distinctly Australian version of this movement, which may have had far greater influence on Fristrom, since his career as a painter seems to have begun upon his arrival in Brisbane. Very briefly, the idea of this style was not so much about creating a realistic scene or view, but the conscious creation of an artwork that had “effect”, embodying the feel of being in a place, focusing upon quality of light and atmosphere rather than details and more often than not choosing an everyday or vernacular scene as opposed to something dramatic and “picturesque”. The work was also probably painted outside in one sitting or ‘en plein air’ as the French termed this practice. It was an early stage in the modernist journey which began to look at the formal elements of composition and construction of a painting as an end in itself. It’s an artwork which would be deemed of far superior quality and value than the one I looked at last week by TF Gallagher. The brushwork is quite beautiful – it is light, deft, skilfully and economically applied. In contrast Gallagher mushes up his paint terribly and it is overworked and actually a little bit ugly up close. Also Fristrom clearly has a good understanding of the pictorial space of the artwork and “effective” depiction of its subject, in short he is closer to the art scene and fashions of the time. In contrast Gallagher, painting in the 1940s, reveals his amateurism and provincialism with his insistence upon a dramatic picturesque style – owing more to early tourism photography than an engagement with modernist art. I have placed the Gallagher and Fristrom in opposition in order to get closer to an idea of place, and concepts of place and space. The idea that place might be a crucial grounding concept for our lives has generally been considered a little bit old-fashioned and a bit of a throwback to the age of enchantment in pre-modern times. But these arguments are gaining currency possibly as humanity becomes more disassociated physically with place. I also wonder if we might start celebrating regionalism and “our place” a little more as an outcome of Covid-19. For me, regardless of the relative merit of the works within an art history framework, both works can be understood as attempts to depict and understand place but from two different and potentially opposed ontologies or understandings about the nature of being. I have run out of room here but I will post additional blogs exploring this further and why I believe that an exploration of the concept of place and being is crucially important for regional cultural institutions. . Below is the other Fristrom work at the Gallery. To find out more about Fristrom, check out the biography on Te Ara https://teara.govt.nz/en/biographies/3f13/fristrom-clas-edvard and view online the extensive collection of his work at the Dunedin Public Art Gallery. 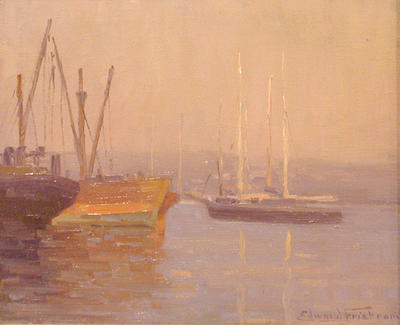