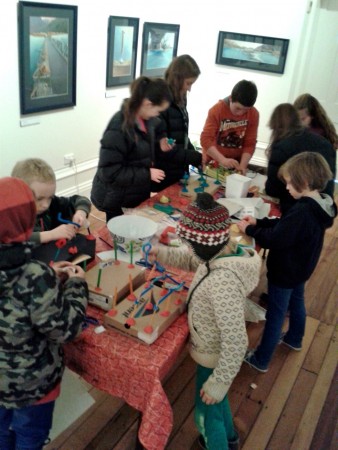 Various types of bridges were constructed out of cardboard, pipe cleaners, pop sticks and play dough in the Gallery during the Winter Holiday Programme. The session started with a tour of Ioan Grigores THE BRIDGE exhibition. Then we rugged up and ventured out the back of the Gallery for a tour UNDER the bridges along Oamaru Creek. We walked over and under many bridges before venturing under what was the widest bridge in the Southern Hemisphere (before the Sydney Harbour Bridge was built) the Thames street bridge. Also due to perfect timing we stood under the rail bridge as a train went over. The intrepid explorers then returned past the railway station to the warmth of the Gallery to look at Burns Pollock THE BRIDGE. Followed up by a bridge building session by the budding civil engineers. Two of the children were even hoping to pack their models in their suitcases to take home to Australia!