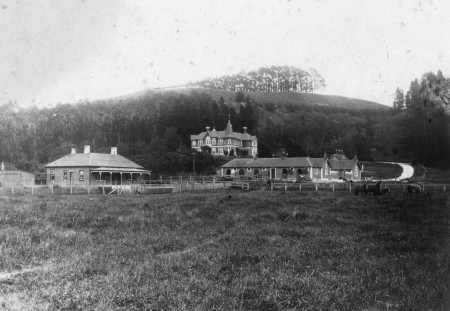 St John McLean Buckley was the nephew of farmer and politician, John McLean. St John was responsible for the construction of the elaborate homestead, The Castle in the grounds of St Kevin’s College, and is another of Oamaru’s early citizens buried in the Oamaru cemetery.

Buckley was born in Waikakahi in 1869. His father, the Hon. George Buckley, sent him to England at a young age for private schooling and subsequently to Oxford University where he studied Law. Buckley was doing well with his studies, gaining honours after his first year, but due to health concerns was forced to reconsider his career path.

In 1891 Buckley returned to New Zealand, initially settling near Ashburton where he oversaw operations at Lagmhor Estate for his uncle. After a period of time he transferred to the Waitaki Plains Estate, also owned by McLean, where he worked in a similar position. Buckley later moved on to another of his uncle’s properties, Redcastle Estate.

In 1899 Buckley married Frances May Miller, the daughter of Sir Henry Miller. They eventually had twin daughters Gladys and Doris and later two sons, John and William. The Buckley’s lived at Redcastle Estate with John McLean, who by this stage was an elderly bachelor. When he dies in 1902 he left his fortune and all of his property to his oldest nephew, Buckley.

After his uncles death, Buckley arranged for the construction of a large brick homestead and elaborate stables at Redcastle. The home was designed to reflect the name of the estate. The red brick and orange tiles that were used to build the house were imported from France, a contrast to the local limestone commonly used in North Otago. Redcastle homestead was completed in 1904, and included two bricks especially made with the names of the Buckley twins pressed into them. The part of the estate that includes the old homestead is now part of St Kevin’s College.

In the early 1900s the Government brought a lot of North Otago’s large estates for subdivision. Buckley’s property, Waitaki Plains Estate, was one of the first sold. The subdivision was known as the Steward Settlement. Buckley kept Redcastle Estate, which he often allowed the community to use for the entertainment of notable guests.

As a community minded man, Buckley was involved in a number of the town’s activities. Perhaps most worthy of mention is his financial contribution that ensured a clock was included in the tower of the Post Office (now the Waitaki District Council building). In 1902 the government stated that they would erect a tower on the Post Office if the town provided the clock. The town struggled to come up with the money to purchase a clock, but Buckley came forward with the necessary funds as a memorial to his recently deceased uncle. The new clock was started by Buckley on 17 September 1903. However it initially had teething problems, at midnight on 25 October the chimes rung continuously for 217 strokes, stopping only because someone arrived to put an end to the ringing.

St John McLean Buckley was only 46 when he passed away. His death was not sudden, as he had suffered a long illness, but it still came as a shock to the community. He was laid to rest in the Oamaru cemetery in an almost secret ceremony in the early hours of the morning the day after he passed away. Shortly after the death of Buckley, his wife and children went to live in England. The estate was rented out for a number of years before being purchased by a local business syndicate. In later years the property was subdivided and re-sold, with the homestead and adjacent land eventually purchased for the purpose of a Catholic boarding school in 1925.

All information in this article comes from the North Otago Museum Archive.

Sources for this article:

Written by Shanann Carr, Curator of Archives February 2009 to June 2010.