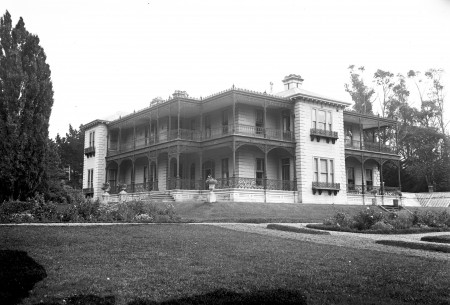 As Curator of Archives at the North Otago Museum it is important to know who in Oamaru’s past is of cultural and historical significance. The research into the background of these people is one of the highlights of my role. Being new to the area, knowing who to research can be tough to work out, but the Oamaru Cemetery is a perfect source of clues, as often the glorious headstones are the only remaining sign indicating the importance of a person in Oamaru’s past.

One of the more impressive headstones in the cemetery belongs to John Reid of Elderslie estate. Unlike other historical figures of high stature, little is left of this great mans legacy. The majority of his vast estate was sold off long ago, and his fine homestead destroyed by fire in the 1950s, but John Reid was an important man in Oamaru’s history and is certainly worthy of remembrance.

John Reid was born near Stirling, in Scotland, in 1835. In his late teens, after completing his education, Reid embarked on a career in business in the city of Glasgow. He did not hold this position long and eventually made the decision to follow many of his peers and relocated to Victoria, Australia in 1853. Once there he commenced a ten year career as an engineer at the Mount Egerton Goldmine near Ballarat, marrying Agnes Humphries in Melbourne at the age of 21.

In 1863 John and Agnes Reid left their life in Australia for new beginnings in Otago, New Zealand. Once in Dunedin, Reid became engaged in commerce as a representative of a number of English and Australian commercial firms. He had a natural talent for business and before long became a very successful man. With this success Reid made the decision to purchase land in North Otago. In 1865 Reid purchased 16,000 acres near Oamaru, an estate he named Elderslie after the birthplace of William Wallace in Scotland. Reid remained in Dunedin while the grounds of Elderslie were prepared for habitation. The estate was park like; made up of farmland, lavish gardens, small lakes formed by the damming of the Waiareka River, exotic animals and a large homestead and stables. Reid took up permanent resident at Elderslie in 1874.

In 1879 Reid acquired the neighbouring estate of Balruddery from the late Dr Webster, this more than doubled Reid’s land with a total of 33,000 acres and made him the most significant landowner in North Otago. Balruddery was kept separate from Elderslie and was managed by Angus Polson, and later, Reid’s third son, Charles. Both estates farmed sheep and Elderslie, with its impressive stables, was also equipped for the breeding of horses, both for work and racing.

Reid was one of the first to foresee the positive impact the frozen meat trade could have for the people of Oamaru and was one of the local directors of the New Zealand Refrigeration Company, the first business of its kind in New Zealand. While on a trip to England with his wife, Reid arranged for a refrigerated steamship to be built to trade directly between Oamaru and London. The ship, named the S.S. Elderslie, arrived in Oamaru on 25 August 1884. Reid was a popular man for his achievements and received a banquet in his honour, but was later disappointed by the lack of support by local farmers and it became impractical to confine the ship’s trade to Oamaru.

During his life in North Otago, Reid was a member of many local organisations. He was the president of the A&P Association and the Acclimatisation Society, a director of the Oamaru Woollen Factory Company and Chairman of the Waitaki High School Board and Waiareka Road Board. Reid was also a member of the Oamaru Harbour Board, the Waste Lands Board, and the Railways Commission of 1880. Reid stood, unsuccessfully, for election to Parliament for Waitaki three times and also failed to get elected to the first Waitaki County Council. He had conservative values and was not afraid to speak out on topics that had little appeal to many of the North Otago locals.

John Reid passed away on 15 August 1912. Most of Elderslie and Balruddery estates were sold off or subdivided by the mid 1910s. The Reid family sold what was left of the property in the 1920s. In the years that followed the remaining land was once again subdivided and the homestead was first turned into a guesthouse, then a cabaret. Sadly, the cabaret burnt down a week before it was due to open. The stables have survived and remain on their original site.

Reid was a man of dignity and of high social standing. While most of his once vast estate has disappeared his headstone stands tall in Oamaru Cemetery, a constant reminder of the man that was John Reid.

All information in this article comes from the North Otago Museum Archive.

Written by Shanann Carr, Curator of Archives February 2009 to June 2010.